Posted on October 10, 2019 by cindytoquecooking 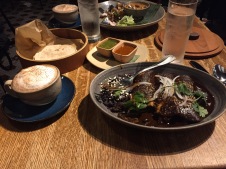 Although not a regular restaurant goer as there are always so many fun dishes to cook myself, I have been a fan of Rick Bayless for 20 years and had the fortune of dining at Frontera in Chicago last week.   It was the best Mexican meal I’ve ever eaten in the U.S.   His chicken mole had a special twist to it.  I couldn’t figure out if it was just some super cilantro or a touch of epizote.  All I can say was it was A1 delicious.  The chocolate cappuccino was frothy with a tad of cinnamon and great Intelligentsia espresso.

Over the years I watched his TV series “Mexico, One Plate at a Time”, cooked from his cookbooks and went to a local Williams Sonoma to have him sign one of my cookbooks.  So you can imagine what a thrill it was to finally dine at his flagship restaurant.  Try out his recipes at home and watch his show.  I’m thinking of an all Mexican cooking week next summer at camp.  Let me give some thought to that but it could be super fun and Mexican food is a hit with the younger chefs.

This entry was posted in Uncategorized. Bookmark the permalink.