Posted on September 28, 2017 by cindytoquecooking

Hats off to young Palo Alto chef Anna Ghai. We are so proud of her.  Anna attended La Toque de Cindy’s Cooking camps in 2016 and 2017.   She was a delight to have in class and we hope we taught her a few tricks and techniques she used on the show. I would have to say that Anna came to class armed with amazing cooking skills she learned before coming to class.   She triumphed on Chopped Junior with her mastery in the kitchen. Her family was behind her every step of the way from numerous practice sessions, strategizing recipes, handling the logistics of the New York trip to film the show and crunching through the pile of forms and admin which go along with being on a TV show.

See what the Palo Alto Weekly has to say about her victory.  To see the full episode, go here.

It takes nerves of steel and a lot of ingenuity to compete on a Food Network show.   Anna did such a spectacular job and was adorably so full of smiles in every camera angle.   The toughest challenge is the dessert round on Chopped Junior. Although the clock ticks away for a half hour, once one brainstorms a recipe and runs around the kitchen to gather ingredients only a scant 15 minutes are left to pull it off.   Anna’s brainchild of clafouti was excellent as this only takes a few minutes to bake. Using the individual ramekins made cooking even faster.  The crumble on top with extra lime to bump up the flavor was a great idea.   Check out her presentation of a caramel sauce ladled into a spoon on the side of the plate. What an excellent idea. A lot of chefs are using this technique for appetizers but what a wow as a concept for a dessert side sauce. 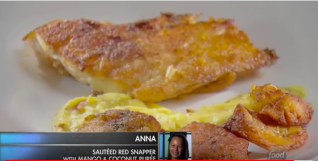 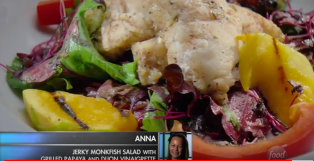 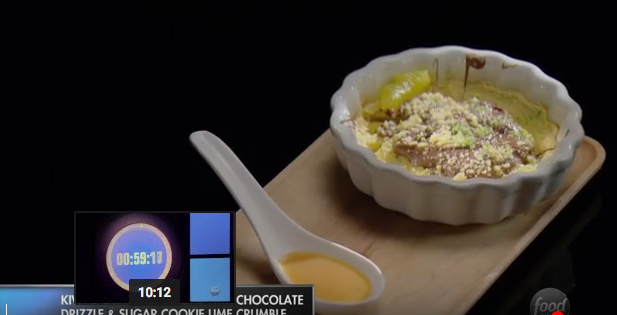 I spent some time coaching Anna in advance of the competition as did some of my other students.   If you would like to audition for a Food Network competition and want some advice or would like to get in touch with the casting agents just write to latoquedecindy@gmail.com.   I’d be happy to prepare you for a show.

This entry was posted in Uncategorized. Bookmark the permalink.